Civil servants are soon to be given greater powers when new legislation, currently being considered by our legislators, is enacted. The legislation is the Civil Service Regulation (Amendment) Bill 2018  https://hr.per.gov.ie/wp-content/uploads/Draft-General-Scheme-of-the-Bill-2018.pdf  . As a prelude to the Bill, a Regulatory Impact Analysis (RIA) was produced by the Department of Public Expenditure and Reform. The RIA is published on the Department’s website https://hr.per.gov.ie/wp-content/uploads/Regulatory-Impact-Analysis-2018.pdf which makes for interesting reading.

Why the new legislation?

Mr. Pascal Donohue, T.D., Minister for Public Expenditure and Reform, explained why the new legislation is being proposed, in a reply to a Dáil Question on 4 December 2018. He said that – “The primary purpose of the Civil Service Regulation (Amendment) Bill 2018 is to allow management decisions around serious disciplinary sanctions, up to and including dismissal, to be devolved in the civil service. The changes in the Act will enable the civil service to improve and modernise disciplinary and dismissal processes and bring them in line with good practice elsewhere.” https://www.oireachtas.ie/en/debates/question/2018-12-04/179/#pq-answers-179

The new legislation will amend the Civil Service Regulation Acts 1956-2005 and the Public Service Management Act 1997. Box 1 summarises the key objectives of the new legislation. These changes will contribute to help a commitment in the Civil Service Renewal Plan to “strengthen the disciplinary code to enable managers to take more effective and decisive action as required to tackle underperformance, including exits.” Furthermore, one of the strategic priorities of the People Strategy for the Civil Service 2017-2020 is to “Build, Support and Value Managers as People Developers”. The key provisions of the proposed legislative amendments will contribute to the achievement of this priority by empowering managers to manage their staff effectively rather than having all serious sanctions determined at the very top of an organisation.

Why do a Regulatory Impact Analysis?

In April 2018, the Government approved the drafting of the Civil Service Regulation (Amendment) Bill 2018.  The Regulatory Impact Analysis (RIA) examined how best to implement the Government decision. Before examining the specific features of this RIA, it is useful to recall why RIAs are undertaken – see Box 2.

Three options were considered in relation to the implementation of the legislation:-

Box 3 summarises the costs and benefits of the three options 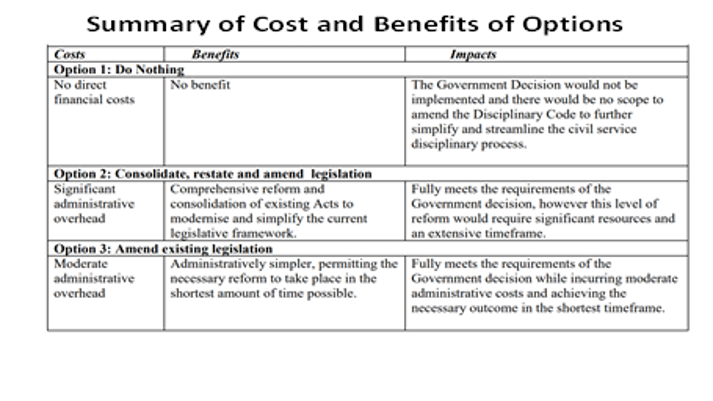 Following analysis, the RIA concluded that the preferred option was Option 3. This option was considered best placed to achieve the policy objectives within the desired timeframe. Amending the existing legislation would allow for the Government’s  decision, to devolve disciplinary powers within the Civil Service, to be fully realised within the shortest timeframe and with less resources than a full consolidation, restatement and amendment of the legislation would demand.

A key requirement of Regulatory Impact Analysis is consultation. Considerable consultation and analysis was undertaken for this RIA. ByrneWallace, a firm of solicitors specialising in Employment Law, was appointed to review the Civil Service Disciplinary Code, relevant legislation and policies from a legal point of view. A further strand of analysis of the previous Code took the form of a Business Process Reengineering review (BPR), carried out by Clarion Consultants. Existing documentation was analysed and a number of interviews and workshops were conducted:

The Office of the Attorney General was consulted in relation to proposals contained in the draft General Scheme. A workshop was held with a working group of HR Managers to discuss the practicalities of further amending the disciplinary decision-making and appeals process. In addition, consultation was carried out with Departments and Offices as to how the proposed new definition of Appropriate Authority should apply to them.

A draft RIA was then circulated to all HR Managers and Staff. Concerns were raised by the different stakeholders. And the RIA does point out  that – “We intend to continue consultations with the staff side to address their concerns. As the legislation is enabling in the first instance, any practical changes in relation to who carries out disciplinary actions, up to and including dismissal, will be dealt with in consultation with the staff side through amendment to the Disciplinary Code”. https://hr.per.gov.ie/wp-content/uploads/Regulatory-Impact-Analysis-2018.pdf

The proposed legislation should allow for the streamlining and strengthening of the disciplinary and associated appeals process, in the Civil Service, through the devolution of authority for disciplinary decision making and appeals further down the line. Moreover, the reform should help to address the elaborate structure that exists at present. Finally, the wide-ranging consultation and analysis undertaken for these Regulatory Impact Analysis augers well for legislative change that will produce positive and workable results. 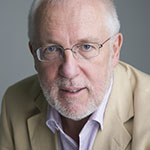 Tom Ferris is a Consultant Economist specialising in Better Regulation. He lectures on a number of PAI courses and contributes blogs regularly to PAI.

He was formerly the Senior Economist at the Department of Transport.

On Friday 22 March Tom Ferris will lead an update seminar on Regulatory Impact Assessments. Click here for more information, or to reserve your place.