To assess regulatory governance, the OECD and the EU joined force to publish a report last month entitled Better Regulation Practices across the European Union 2022. The report argues that by ensuring integrated approaches to the design, delivery, and review of regulations, all EU Member States can achieve a seamless functioning of the Single Market. In a joint preface to the Report, Mathias Cormann (Secretary-General, OECD) and Maroš Šefčovič (Vice-President, European Commission) point out the importance of ensuring –

…that policy makers consider the most relevant alternatives before regulating and fully understand the expected impacts of rules, including those that may be felt across borders. Engaging with those directly affected by regulations is key to improving policies, boosting trust in government action. Ultimately, better regulation helps ensure that policies deliver the promised benefits to citizens.

What does the Report cover?

The EU/OECD Report analyses current and developing practices for improving the quality of laws and regulations in all 27 Member States of the European Union. The report also systematically assesses the use of evidence-based tools and stakeholder participation to improve the design and review of both domestic and EU laws and regulations and identifies current and future trends in regulatory policy. It is based on empirical evidence, research, and data, including the OECD 2021 Indicators of Regulatory Policy and Governance. By reflecting on practical experiences, discussions and lessons learned from EU Member States and OECD countries, the Report offers examples of how to benefit from sound regulatory policy and effect positive change.

On foot of its analysis, the Report produced several findings and recommendations. Box A gives a flavour of these.

Box A: EU and OECD push for Better Regulation Practices across the European Union

1. EU Member States could better pursue regulatory co-operation beyond the borders of the European Union.

2. Member States have a critical role to play in ensuring that EU policies deliver for their citizens.

3. Member States can build on their current use of regulatory management tools when transposing EU directives to ensure all impacts are assessed.

4. The appraisal of costs and benefits should be balanced and could better account for community impacts.

5. The application of the proportionality principle* is often unclear and varies widely across Member States.

6. Governments have yet to fully explore non-regulatory options for meeting citizen and business needs.

7. Policy makers can and should use all available information before rules are made to ensure they work as intended.

8. Making better use of evaluations could help Member States understand if rules work in practice for citizens.

* The principle of proportionality seeks to set actions taken by EU institutions within specified bounds. Under this rule, the action of the EU must be limited to what is necessary to achieve the objectives of the Treaties. In other words, the content and form of the action must be in keeping with the aim pursued.

Areas covered in the Report

The EU/OECD Report examines the EU Member States’ general content of regulatory policies, their institutional settings, their engagement in multiple mechanisms of international regulatory co-operation, and the allocation of regulatory oversight functions within government. It also provides an overview of the trends in the use of regulatory management tools across the European Union, for domestic and EU laws and regulations;

emphasis is placed on use of RIA with a focus on the proportionality principle. Other matters examined are: –

· The types of ex post evaluations commonly conducted in EU Member States, and

· The general approaches taken to the management of regulatory stock and to stakeholder engagement when undertaking evaluations.

The Report provides country profiles for each EU Member State and the European Union including an overview of regulatory practices, key achievements, and areas for improvement. This Blog confines itself to looking at the results for Ireland.

The Report congratulated Ireland for developing, and currently trialling as a prototype, a single central government website for consultations. However, despite this recent improvement, the Report notes that Ireland’s consultation practices do not yet operate on a systematic basis across government departments. As Ireland develops the tools to conduct more transparent and open stakeholder engagement, public consultation could be applied more systematically to a broader range of draft regulations, particularly for subordinate regulations.

The Report went on to describe the roles of the Department of the Taoiseach, the Office of the Attorney General and the Department of Public Expenditure and Reform in the different areas of the Better Regulation Agenda. It notes that the Standing Orders from the Houses of the Oireachtas state that the minister responsible for implementing a law must provide an assessment of its functioning within a year. Several sectoral departments have also started to conduct policy and mandate reviews, which are required at least every seven years according to the Policy Statement on Economic Regulation issued in 2013.

Ireland has introduced “sunsetting” clauses in some of the subordinate regulations relating to the COVID-19 pandemic. The EU/OECD report recommends that –

“Irish policy makers could however be more systematically required to conduct ex post evaluations of existing regulations, to assess whether they actually function in practice.” https://www.oecd.org/publications/better-regulation-practices-across-the-european-union-2022-6e4b095d-en.htm

The Report includes a statistical analysis of Ireland’s regulatory performance. The data refer to the year 2021. The results are set out in Box B. The full range can be located on the weblink http://oe.cd/ireg using the instruction “access composite indicators scores for iReg” 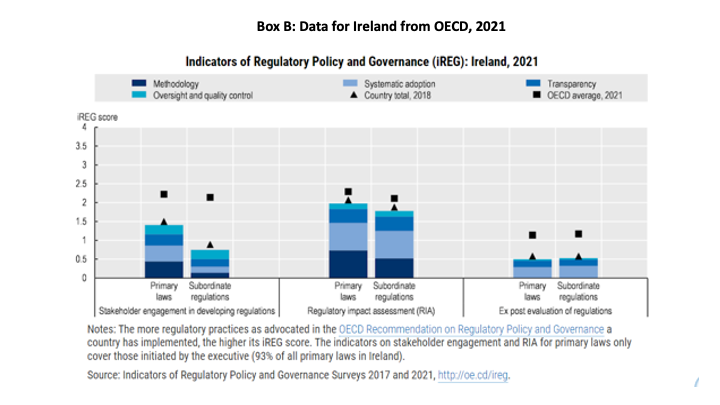 The box shows that in 2021 Ireland scored below the OECD average under all headings. In some cases, the gap is quite wide. An examination of the 2021 data shows that:

· In the case of ‘ex post evaluations of regulations’, for both Primary Laws and Subordinate Regulations, Ireland scores 44 per cent of the OECD average score;

· As regards performance in ‘Regulatory Impact Assessment’ (RIA), Ireland achieved 86 per cent of the OECD average score in the case of Primary Laws and 84 per cent in the case of Subordinate Regulations

· When the different aspects of RIA for Primary Laws are examined, Ireland shows mixed success – it does quite well with a 73 per cent score for both systematic adoption (consistently doing RIAs) and methodology (guidelines for doing RIAs), but only moderately well, with a score of 37 per cent, in terms of transparency

(public availability of RIAs) and very poorly, with a score of 15 percent, for oversight, and

· When the different aspects of RIA for Subordinate Regulations are examined, Ireland again shows mixed success – it does quite well with a 73 per cent score for systematic adoption (consistently doing RIAs); moderately well, at 52 per cent, for methodology (guidelines for doing RIAs), but only with scores of 38 per cent, in terms of transparency (public availability of RIAs) and allow of 15 per cent in the case of oversight.

On foot of this analysis, the EU/OECD Report recommends that –

Of course, the oversight does have to be a new body. I explored dimensions of this matter in an article published last December by the Irish Times https://www.irishtimes.com/business/economy/oecd-scores-show-ireland-must-try-harder-on-regulatory-impact-assessments-1.4747437

The oversight function could be conducted by the Department of the Taoiseach or by the Law Reform Commission. Whatever form the function takes, or wherever it is located, there is a better chance that government departments will make more serious efforts in their regulatory work if they know the results of that work is going to be submitted and published by an oversight body.

Tom Ferris is a Consultant Economist specialising in Better Regulation. He lectures on a number of PAI courses and blogs regularly for PAI. He was formerly the Senior Economist at the Department of Transport, Ireland.