The current EU Directive for Environmental Impact Assessments contains specific references to mitigating the impact of climate change. It now requires EIAs to include a description of the significant effects of projects on the environment resulting from, inter alia – “the impact of the project on climate (for example the nature and magnitude of greenhouse gas emissions) and the vulnerability of the project to climate change.” https://eur-lex.europa.eu/legal-content/EN/TXT/?uri=celex%3A32014L0052 . The requirement is also part of Irish legislation, following the transposition of the EU Directive into Irish law in May 2020. In turn, the specific steps to be taken in developing EIA Reports are spelt out in revised guidelines published in May 2022 by the Environmental Protection Agency. These guidelines are entitled ‘Guidelines on the information to be contained in Environmental Impact Assessment Reports.’ They are intended to be an authoritative reference for those preparing reports for projects covered by the legislation. The introduction to the guidelines states that – “The Guidelines have been updated following the introduction of transposing legislation and are now formally adopted and published by the Environmental Protection Agency.” https://www.epa.ie/publications/monitoring–assessment/assessment/EIAR_Guidelines_2022_Web.pdf

What is an EIA?

An Environmental Impact Assessment (EIA) is the process of examining the anticipated environmental effects of a proposed project. These assessments take on an increasing

significance as the Government commits to achieving a climate-neutral economy by the end of 2050.

There are many stages in the EIA process, from consideration of environmental effects at design stage, through consultation and preparation of Environmental Impact Assessment Reports (EIAR), evaluation of the EIARs by a Competent Authority and the subsequent decision as to whether projects should be permitted to proceed. Given the number of stages it is necessary to involve several players. Box A lists the players.

Box A: Box A; Key Players in EIA Process

Experts: Those involved in the preparation of EIARs should be qualified and competent. Sufficient expertise, in the relevant field of the project concerned, is required for the purpose of its examination by the competent authorities to ensure that the information provided by the developer is complete and of a high level of quality.’

Competent Authority: The term ‘competent authority’ means the Minister or public authority to which an EIAR is required to be submitted, i.e., the authority charged with examining an EIAR with a view to issuing a consent to develop or operate.

Statutory consultees: Those organisations and bodies, defined by statute, which local planning authorities are legally required to consult before reaching a decision on relevant planning applications

What are the stages of an EIA?

While Developers are usually the ones that drive the development of projects, the quality of the expertise provided for Environmental Impact Assessment Reports (EIAR) will determine whether the Competent Authority gives the ‘go-ahead’ for projects. And that is where the EPA Guidelines come in to play. They assist the experts to ensure that all the requirements emanating from the Directive have been dealt with. They start that work after the Developer has successfully completed the EIA screening stage. That is the stage where a decision is needed to identify whether (or not) an EIA is required. If an EIA is needed, then the scope of the EIAR is established (scoping), after which the EIAR is prepared by the experts, who must be engaged for the project by the Developer, as part of the consent application.

Following the submission of the EIAR, and after examination of the results of the public consultation, the Competent Authority comes to a decision, based on all the information gathered in the process, either authorising, modifying, or rejecting the project. For facility, a simple model of all stages of the EIA process has been prepared for this Blog. It is presented in Box B. The final stage of ‘enforcement and monitoring’ can only take place after the Competent Authority has given consent for the project. 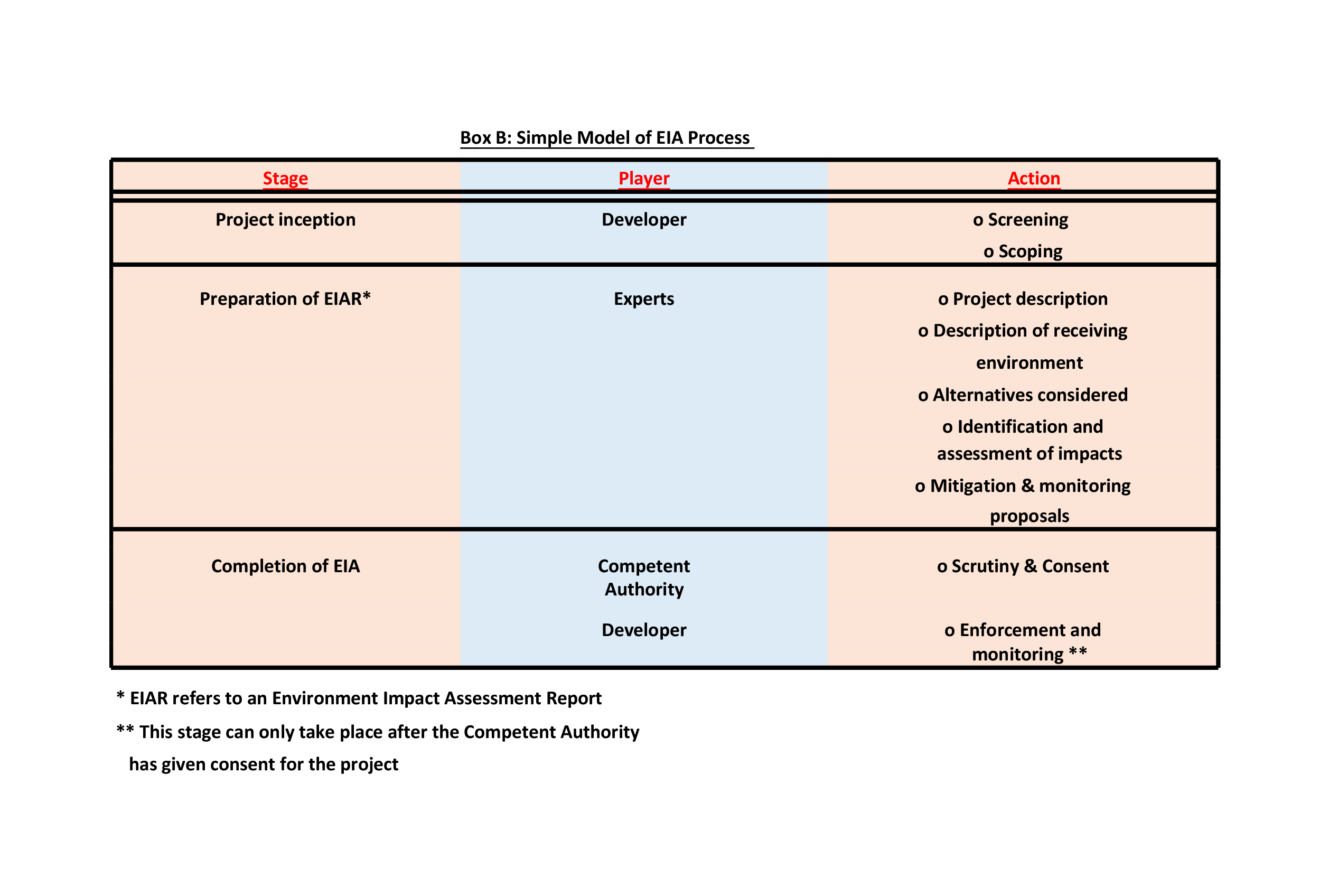 Can a developer avoid having to do an EIA?

There is a lot of work required for an EIA, particularly as it must meet all the requirements listed in the guidelines for the preparation of an EIAR. So, the question arises – can the Developer avoid having to do an EIA? The short answer is no. The EU Directive lists very clearly the criteria required for projects subject to EIAs. It also devotes two annexes to listing projects that should be subject to assessment. The details are set out in the informal consolidated version of the EU Directive – see https://ec.europa.eu/environment/eia/eia-legalcontext.htm

Given that the EU Directive has been transposed into domestic legislation in Ireland, Irish projects are subject to the legal requirements of the EU Directive. It should be noted that a Statutory Instrument – S.I. No. 191/2020 – European Union (Environmental Impact Assessment) (Environmental Protection Agency Act 1992) (Amendment) Regulations 2020 – gives effect to the EU Directive – see https://www.irishstatutebook.ie/eli/2020/si/191/made/en/print

In line with legislative requirements, the Competent Authority not only assesses the EIA Report, but also considers the results of the public consultation, before coming to a decision either authorising, modifying, or rejecting the project. Certain information on the approval or rejection of projects and any conditions associated with them, as well as the principal arguments upon which the decision were based, must be made available to the public and transmitted to other concerned Member States.

The whole EIA process is quite transparent in Ireland. An official EIA Portal ensures that EIAs are available online from the Department of Housing, Local Government and Heritage. As an online map-based website it provides users with access to applications for development consent accompanied by Environmental Impact Assessment Reports. All applications for consent made under the relevant legislative codes, including applications for offshore developments, are included on the Portal. The EIA Portal website can be accessed from https://www.gov.ie/en/publication/9f9e7-eia-portal/

Do EIAs play a more important role, with Climate Change?

Environmental Impact Assessments (EIA) are a key instrument of EU environmental policy. They help to ensure that projects, which are likely to have significant effects on the environment, are granted development consent only after an assessment of the likely significant environmental effects of those projects has been concluded. With the increased challenges from climate change, EIAs have taken on an even more significant role. The climate change challenge is recognised in the most recent version of the EU Directive. Specifically, Annex 11 of the Directive requires EIAs to include a description of the significant effects of projects on the environment, resulting from, inter alia – “the impact of the project on climate (for example the nature and magnitude of greenhouse gas emissions) and the vulnerability of the project to climate change”.

Tom Ferris is a Consultant Economist specialising in Better Regulation. He lectures on a number of PAI courses and blogs regularly for PAI. He was formerly the Senior Economist at the Department of Transport, Ireland.