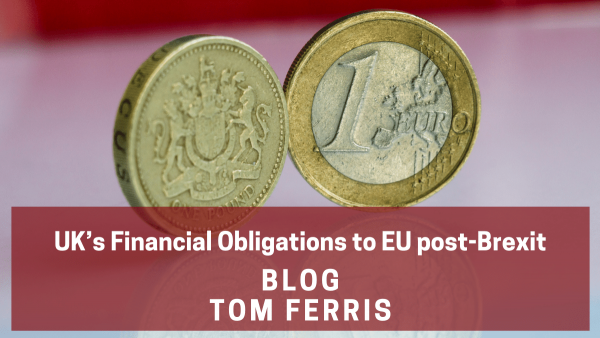 This Blog looks at the financial bill that the UK faces following its departure from the European Union (EU). The latest estimate is that the UK owes the EU over €47 billion; according to the EU’s Consolidated Accounts 2020 published earlier this month.  This estimate is disputed by the UK authorities according to reports in the UK media. In the case of the Financial Times, it had the headline – “UK and Brussels clash over £40bn Brexit divorce bill”.

On 31 January 2020, the UK withdrew from the European Union. The terms of its departure are defined in the Withdrawal Agreement. A precise set of obligations were agreed, by the EU and the UK, as part of the Agreement.

There are eight main areas where the EU and the UK agreed as part of the Withdrawal Agreement there would be obligations to make payments. They are:-

The Withdrawal Agreement lays down the manner in which these obligations will be dealt with each year. In summary the EU will report twice a year to the UK on the amounts due and the UK will pay these on a monthly basis. The reporting will be updated each year based on actual figures.

The latest estimate is that the UK owes the EU €47.5 billion. This is according to the EU’s Consolidated Accounts 2020 published earlier this month. The breakdown of the estimate is presented in Table 1.

In January 2018, Philip Hamell, the then UK Chancellor of the Exchequer, informed the UK Treasury Committee that the total cost of the settlement would be between €40 billion and €45 billion. The higher limit is €2.5 million below the latest estimate from the European. Commission.

The difference between the two estimates is significant. The UK estimate is over 11 per cent lower than the EU estimate. There are a number of areas that need to be to be evaluated to weigh-up the differences. For example:-

Given the different estimates that have emerged, the relevant officials in the European Commission and in the UK Treasury should, it is suggested, be in more regular contact in order to narrow down their differences. The basis for the UK’s debts was agreed in detail as part of the Withdrawal Agreement. Too often the UK commitments are presented as a “divorce bill”.  Much more trust is needed from both parties in handling this matter. Megaphone diplomacy is not the way forward.

Tom Ferris is a Consultant Economist specialising in Better Regulation. He lectures on a number of PAI courses and blogs regularly for PAI. He was formerly the Senior Economist at the Department of Transport.