The 29th March and still no Brexit!

Prime Minister Theresa May has failed to get the House of Commons to agree to her plan for the UK to leave the EU. While the House continues to ruminate on a workable plan, the recent European Summit in Brussels has set two clear dates for the UK to make up its mind on Brexit. Specifically, The European Council agreed to – “… to an extension until 22 May 2019, provided the Withdrawal Agreement is approved by the House of Commons next week. If the Withdrawal Agreement is not approved by the House of Commons next week, the European Council agrees to an extension until 12 April 2019 and expects the United Kingdom to indicate a way forward before this date for consideration by the European Council”.  https://www.consilium.europa.eu/en/meetings/european-council/2019/03/21-22/

The National Economic and Social Council pointed that out many years ago that – “… it is not  possible  to  stop  the  world and let Ireland off”.  ( https://www.nesc.ie/; 3rd Report). And so too for Brexit. Ireland cannot avoid the impacts of Brexit and most of them will be negative. As Philip Lane, Governor of the Central Bank, recently told the Joint Committee on Finance, Public Expenditure and Reform, and Taoiseach, that – “…any form of Brexit will be damaging for Ireland, with a hard Brexit especially so. Recognising these risks, the Central Bank…continue to analyse and work to mitigate the risks posed to the economy, consumers, the financial system, and the regulatory environment”. https://www.centralbank.ie/news/article/introductory-statement-governor-philip-r.-lane-joint-committee-finance-public-expenditure-and-reform-and-taoiseach

The ESRI in conjunction with the Department of Finance has recently published a very useful and timely report on the impact of Brexit.

A team of four produced the report; Adele Bergin, Philip Economides and Abian Garcia-Rodriguez of the ESRI, and  Gavin Murphy of the Department of Finance

In each scenario, some of the negative trade impact is partially offset by Foreign Direct Investment being diverted to Ireland.

ESRI’s Estimates of Impact of Brexit

The ESRI first takes a baseline scenario, which assumes that the UK remains in the EU. It then shows what the differences are between the baseline and the three alternative scenarios (the Deal, the No-deal and a Disorderly no-deal).  Overall, in each scenario, the level of Irish output is permanently below where it otherwise would have been were the UK to decide to remain in the EU.

There are two main channels through which the ‘Brexit shock’ will hit the Irish economy; the negative trade shock will serve to reduce economic activity below where it otherwise would have been, while the positive Foreign Direct Investment shock will help to partially offset some of the overall negative impact. However, the ESRI report points out that – “… the trade shock arising from the imposition of tariff and non-tariff measures would lead to lower activity in the international economy and severely reduce the demand for Irish exports. It would also negatively affect Irish competitiveness on impact. However, we would expect some internal adjustment in the economy that would help to restore lost competitiveness over time”. 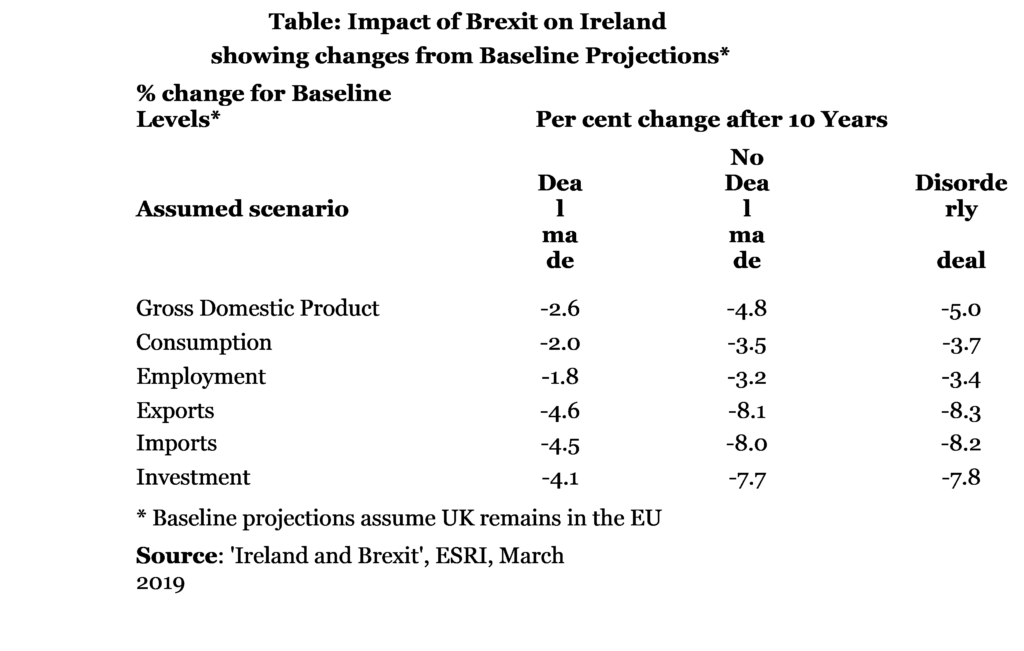 Although these are substantial relative reductions in the level of output over the long run, it is very important to point out that the Irish economy will continue to grow in each scenario but that the growth rate will be lower in the context of Brexit.

The North/South Dimension of Brexit

As well as the economic dimensions there are also many political dimensions to Brexit. In particular, there are Ireland’s concerns to ensure that EU-UK and Ireland-UK negotiations give priority attention to the Northern Ireland dimension, including issues relating to the border, EU funding, and ensuring that the Good Friday Agreement remains fully in place and respected. In that context see my PAI blog of 8 December, entitled ‘The EU/UK Report on Brexit Negotiations is very important for Ireland’. https://pai.ie/eu-uk-report-brexit-negotiations-important-ireland/

Paragraphs 49 and 50 of that agreed report are still contentious particularly as far as the DUP Democratic Unionist Party is concerned. While Paragraph 49 provided for a diplomatic backstop which promised to keep Northern Ireland in “full alignment” with the EU if all else fails; the following paragraph pointed out that whatever Brexit solution emerges no barriers to trade can be created between Northern Ireland and the United Kingdom. The thrust of these two paragraphs still resonate as the UK House of Commons struggle to agree to a plan for the UK to leave the EU. We watch with bated breath.