How to ensure Quality in Public Spending?

The Public Spending Code, which was updated last December, imposes obligations on the organisations that spend public money. These obligations apply to the whole range of State Bodies, from Government Departments, to State-sponsored Companies to Local Authorities. The Quality Assurance Process (QAP) is the tool used by the Code to guide State Bodies in the delivery of efficient public projects. The guidance tool is accessible from here.

The Role of the Quality Assurance Process

It is the responsibility of the accounting officers in State Bodies to ensure compliance with the relevant requirements of the Code. They have to report annually on the extent to which the requirements of the Public Spending Code have been met. They also have to arrange publication of their results on their websites, by the end of May, in respect of the previous calendar year,

There are five main steps in the process. A summary of the steps is presented in the Table 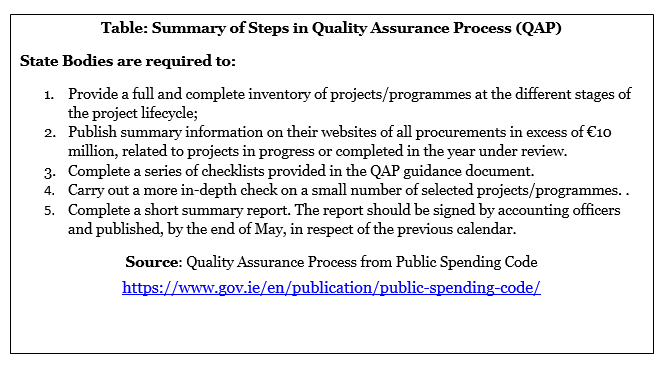 Who undertakes the Work?

The QAP guidelines recommend that the work should be undertaken by internal staff that are as independent as possible of the areas responsible for appraisal, planning and implementation. For example, it is suggested that the work should be done by staff from economic or evaluation units, financial management units, internal audit, staff from an evaluation unit in another Department or academics on a pro bono basis. The process should be led by a small group chaired at senior level.

In addition to the checks undertaken by individual Departments, the Department of Public Expenditure and Reform may undertake its own quality assurance checks from time to time. The QAP Guidelines point out that “This exercise, which aims to promote a consistent approach to Quality Assurance and Value for Money Policy Reforms enforcement across the public service, will not replicate the internal quality assurance process but may instead involve in-depth reviews of the Quality Assurance Report and the processes followed for specific projects or programmes”.

Some Examples of Results

Two sets of results are now mentioned to illustrate actual results from the QA process. First, a Government Department and second Local Authorities.

Department of Transport, Tourism and Sport has been chosen as the government department. The full set of results can be accessed here.   The executive summary of the report for 2018 points out that it– “…fulfils a requirement under the Public Spending Code (PSC) for each Department to put in place an internal, independent, quality assurance (QA) procedure that reports annually on how the Department and its agencies are meeting their PSC obligations. This is the sixth QA report to be published by the Department of Transport, Tourism and Sport (DTTAS) since the PSC came into effect in September 2013…” The 2018 report contains considerable detail in addressing the information requirements that are summarised in the Table above. As regards the requirement to supply in-depth check on a small number of selected projects/programmes, details are supplied on four specific projects. These are

Local Authorities: The results of quality assurance for Local Authorities are collated by the National Oversight and Audit Commission (NOAC). This Commission was established in July 2014 under the 2014 Local Government Reform Act to provide independent oversight of the local government sector. For the year 2018, the NOAC records that all 31 local authorities had submitted their reports by the deadline of end May 2019. The Chief Executives of those local authorities certified that the QA reports reflected the authorities’ assessment of their compliance with the Public Spending Code. The Code requires that the QA reports are published on organisations’ website. However, it should be noted that not every Local Authority met each and every requirement of the Code for the year 2018 – see NOAC website.

It is the responsibility of Departments and State Bodies to ensure that they meet the obligations of the Public Spending Code. Having annual QA reports published is a good thing. They provide an assurance that the Code is being implemented. Only in this way can Irish taxpayers be assured that they are getting real value for money from public expenditure.

Tom Ferris is an independent consultant economist specialising in public sector governance, better regulation and transport economics. He writes regularly for Public Affairs Ireland. He was previously the Senior Economist in the Department of Transport, until February 2006. Since then, he has undertaken consultancy projects for the World Bank, the OECD, and a number of private sector companies. He is an occasional lecturer in public sector economics at NUI Galway, University College Cork, and Public Affairs Ireland. He holds an MA in Economics from University College Dublin, and a Fellowship from the Chartered Institute of Logistics and Transport.