Urgent action is needed if a global climate disaster is to be avoided. Ireland has responded with the Government’s Climate Action Plan. It sets ambitious targets to tackle the many climate challenges.

Taking decisive action to confront climate disruption is a major challenge for all parts of society. The message is getting home to people that climate disruption is having wide ranging negative impacts on Ireland’s environment, society, economic and natural resources. This action plan clearly identifies the nature and scale of the challenge. It charts a course towards decarbonisation by 2050, with sub-targets for all sectors of the economy. In simple terms, decarbonisation means reducing greenhouse gas (GHG) emissions – see Box A.

The climate change plan covers every relevant sector in Ireland: electricity, enterprise, housing, heating, transport, agriculture, waste, and the public sector. It sets out over 180 actions, together with hundreds of sub-actions, that need to be taken over the coming years and decades. The targets are ambitious to say the least. But, if achieved, the overall result will be a cleaner, safer and more sustainable future for the Irish people. John FitzGerald, Chair of the Climate Change Advisory Council, responded to the climate change plan at a recent meeting of the Oireachtas Committee on Budgetary Oversight. He noted that – “Ireland has set itself a binding target to decarbonise by 2050, with key milestones along the way. The All of Government Plan… crystallises the sectoral challenges for 2030. Failure to reach these milestones will have multiple adverse consequences” www.climatecouncil.ie/media/Budgetary%20Oversight%20Committee%20Oireachtas%20Statement%20John%20FitzGerald%2018.06.2019.pdf

It would be very easy to suggest that there are no threats from climate change for Ireland. But it is not possible to stop the world and let Ireland off. A new paper from the International Monetary Fund points out that – “As the frequency and intensity of natural disasters is projected to increase over time with climate change, the economic and social impact of disasters can also be expected to increase” https://www.imf.org/en/Publications/Policy-Papers/Issues/2019/06/24/Building-Resilience-in-Developing-Countries-Vulnerable-to-Large-Natural-Disasters-47020

Taking decisive action to confront climate disruption is a major challenge to every sector of our society. It is Government that has to ensure cohesion and co-ordination as between climate change work in the different sectors. The Taoiseach, Leo Varadkar, recognised the lead responsibility of Government at the launch of the Climate Change plan. He said that the Government – “… will work with people, industry and communities to chart the best and most inclusive way forward. A way forward that is both effective and sensible. One that achieves our targets, and in a way that is thought through and considered, supports employment and living standards and enables a just transition.” https://www.dccae.gov.ie/en-ie/news-and-media/press-releases/Pages/Giving-Ireland-a-Sustainable-Future.aspx

The Government has an important central role to play in tackling climate change. That role is described in Chapter 5 of the plan, which is entitled ‘Governance of the Challenge’. It sets out a new set of governance arrangements and how progress on the roll-out of the plan will be tracked. Progress on target achievements will be monitored on a regular basis and the results published. Specifically, the Plan will be monitored quarterly and updated annually, with a Climate Action Plan 2020 published in early 2020. It also gives a commitment that new actions would be added each year as needed. There are a series of other initiatives that are being introduced. These include a Climate Action Delivery Board that will be set-up within the Department of An Taoiseach, which will hold each department and public body accountable for the delivery of actions set out in the Climate Action Plan. As regards carbon-proofing, the plans states that all Government memoranda and major investment decisions will be subject to a carbon impact and mitigation evaluation, for which a template will be developed. This will be incorporated in Cabinet procedures, in regulatory impact assessments, and in project evaluation processes. The main governance actions are summarised in Box B. 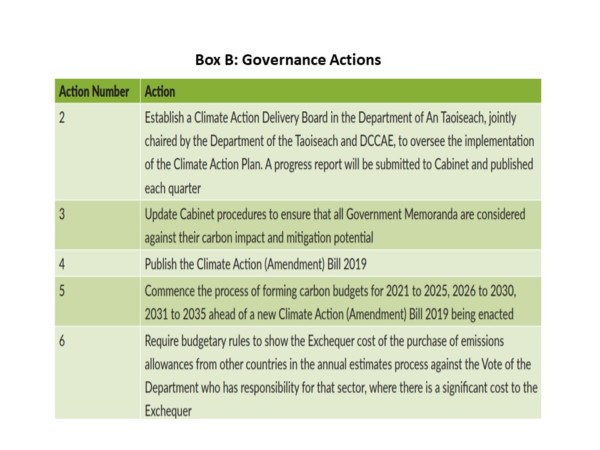 The Plan also announced the establishment of a new Climate Action Council. This will be a successor to the Climate Change Advisory Council. It will have additional powers to, in particular:

Other important initiatives are planned:

The Climate Change Plan is rightly ambitious. It comes with new and expanded governance arrangements. It is now necessary to ensure that the new arrangements are fully and quickly implemented. In particular, it means the public sector needs to increase its expertise to service the different committees, councils and offices that are being set-up in line with the Climate Change Plan. Richard Bruton, Minister for Communications, Climate Action and Environment, highlighted the need for early action on the Climate Change Plan. He puts the challenge well – “We have a short window of opportunity to act. We must act now and leave a better, healthier, more sustainable Ireland for future”. https://www.dccae.gov.ie/en-ie/news-and-media/press-releases/Pages/Giving-Ireland-a-Sustainable-Future.aspx 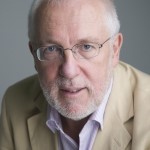