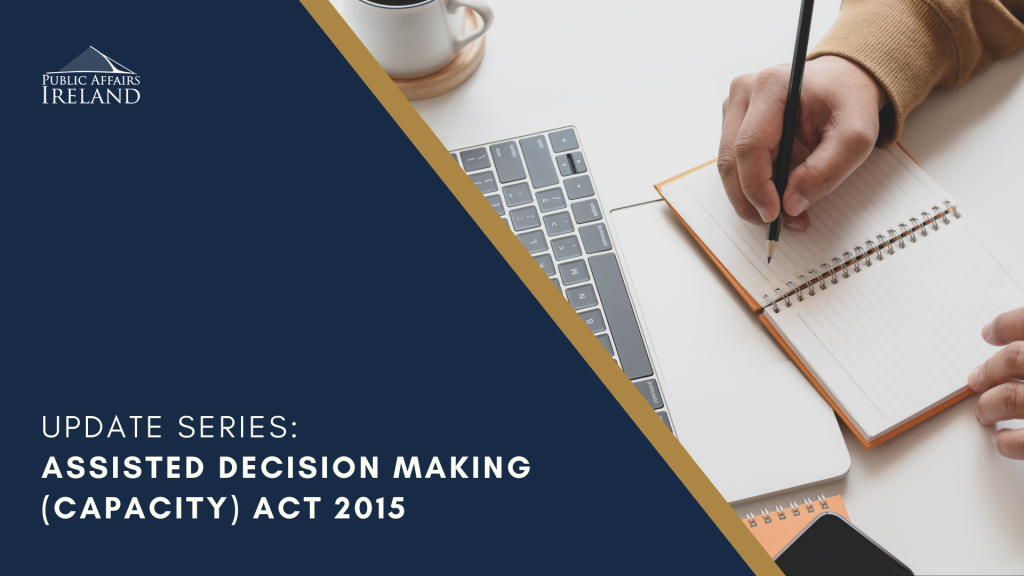 The Assisted Decision Making (Capacity) Act 2015 concerns persons who require assistance in decision making now or in the future. It was signed into law in December 2015 but is not yet fully commenced. The current plan is for full commencement in June 2022.

The Act concerns Wards of Court and the system is changing whereby the Wards of Court office is effectively being decentralised to each region and all future applications for Assisted Care and Wardship will made to the relevant Court.  It is a much expanded role and brings Ireland in line with international norms.

The Act recognises that, as far as possible, all adults have the right to play an active role in decisions that affect them. These decisions can be about their personal welfare, including health and social care, and their property and affairs. It is a move to a more flexible functional approach to the assessment of capacity – moving away from “all or nothing” status approach.  Previously, the assessment was what was considered to be in the person’s “best interests”.  Now, the person’s “will and preference” is the key.

The 2015 Act brings about important changes for people who require support to make decisions and for anyone interacting with them, including healthcare workers. So not only does this reform the Wards of Court Act whereby people who lack capacity are taken under the control of the courts, it also is expanded to include areas of life where the person is not without capacity but may require assistance to varying degrees.

The provisions of the 2015 Act will be as below:

This two hour webinar will help delegates to understand what changes this Act will bring about once commenced and will help them gain an understanding into what is a very complex piece of legislation.

It will also help delegates to understand how the courts will interact and the sort of decisions a court is likely to give.

This seminar will be useful to anyone who deals in court applications and will also be of interest to any healthcare workers or people working in roles or with people where this legislation would be beneficial to know in order to fully understand the changes that are due to come into effect.

It will be of interest to people working or interacting with those who require support to make decisions, whether it be in a healthcare setting or otherwise.

William Maher is a practicing Barrister with a particular interest in employment law and the area of protected disclosures.  In addition to a practice encompassing a broad range of civil and commercial law concerns, William has lectured on Employment Law, Public Law, Irish and EU Constitutional arrangements and the Irish and European legal and political process.  Previously, he worked with IBEC influencing Irish and European decision makers on behalf of the Irish business interests.

All of our open programmes can also be run on an in-house basis. For more information, see our page on In-House Training.

To register your interest in the next cohort of this 2-hour online programme, email amckeever@pai.ie