The bill for bailing out the Irish Banks has reached nearly €42 billion.

The Office of the Controller and Auditor General (C&AG) published the estimate in the ‘Report of the Public Services 2018’. Earlier estimates put the net cost at between €40 and €42.4 billion. The report points out that – “The net overall cost continues to evolve as the interventions end or wind down”.

The State had to take a series of measures to stabilise the banking system following the financial crisis of 2008.  The measures included:-

Obviously, there has been a lot of activity in each of the foregoing areas during the past decade. What the C&AG has now done is to estimate what the net position was as at 31 December 2018. The net position by institution was:

Figure A illustrates the net positions in diagrammatic form: 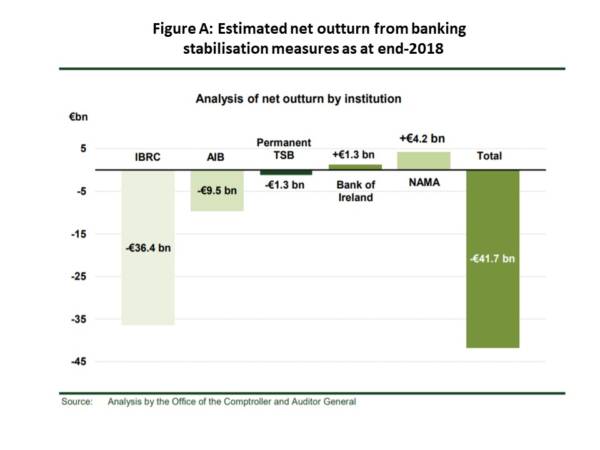 End of the Road

Is the C&AG’s recent estimate the end of the road for the Bailout? Sadly the answer is no.  The net costs will continue to rise due to the ongoing cost of servicing the associated long-term debt. In the long term, when all of the State’s remaining shareholdings have been sold, NAMA has realised its surplus and the Central Bank has disposed of the government bonds it holds, the cost of servicing the debt will be determined. Specifically, the cost of servicing the debt by the prevailing borrowing costs for the State — around €420 million for each percentage point incurred. The C&AG’s report points out that – “For borrowing rates between 2.5% and 3%, it is estimated the interest cost will be between €1.1 billion and €1.3 billion a year for the foreseeable future”.

The eventual net outturn will also be affected by the extent to which the NAMA surplus and the amounts the State realises for its remaining shareholdings differ from the end of 2018 values. According to the C&AG Report – “ The State is not expected to recover further significant funds from its investment in IBRC…it is unlikely that the State will generate a surplus on its investment of €22.2 billion in AIB”.

Lessons to be learned

Very few people in Ireland have been untouched by the negative effects of the financial crisis of 2008 and the subsequent bank bailout. There are some who argue that the banks should have been allowed to go bust. But as Patrick Honohan points out in his book “Currency, Credit and Crisis” (2019) that “Every country needs a well functioning banking system. It provides the mechanism for making payments and other elements of the life-blood of the economy”. And so the Irish government took the decision to bail out the banks. That decision has had many consequences, including the need to ensure greater accountability in the banking sector. In this regard, on foot of a request made by Minister Donohoe in November  has been underway to turn the recommendations into legislation. Last June, the Government agreed that draft Heads of a Bill should be brought forward

The Heads of a Bill will attempt to achieve a number of objectives. First, to ensure the introduction of a Senior Executive Accountability Regime (SEAR) which places obligations on firms and their senior individuals to set out clearly where responsibility and decision-making lies. Second, to introduce Conduct Standards for individuals and firms to provide for statutory powers to set and impose binding and enforceable obligations on all Regulated Financial Service Providers (RFSPs). Third, to introduce an enhanced Fitness & Probity Regime to ensure the effective operation of the regime and the ability of the regime to support the Central Bank’s proposed individual accountability framework and the conduct standards for individuals and firms. Finally, to break the “Participation Link” which addresses the known deficiency in the legislation which requires the Central Bank to first prove a contravention of financial services legislation against a RFSP before it can take an action against an individual.

It will be interesting to see how this new legislation is developed. There is no doubt that such legislation is necessary and timely. In particular, it should be seen to drive positive changes in terms of a wider banking culture, greater delegation of responsibilities, and enhanced accountability while simplifying the imposition of sanctions against individuals who fail in their financial sector roles. Watch this space.

Tom Ferris is a Consultant Economist specialising in Better Regulation. He lectures on a number of PAI courses and blogs regularly for PAI. He was formerly the Senior Economist at the Department of Transport.